It's been Ghostship for almost a year and a half now. Icelandic-ly delicious, no? Until push came to shove and the paint was about to be up there on the bedroom walls, all around us, while we slept. Like a blanket of ghost. I got cold feet. Iceland cold. Maybe I heard one too many ghost stories as a child.

Or, maybe I've been watching too much HGTV - but I started thinking about the transposition of warmth and the shade that passes between two hues and architecting atmosphere. And, well, Ghostship is cold, right? So, I went all Bobby Brown on Mr. Hogarty and decided a warm orange, like a mix of mangoes and sun, was in our sleep future. And Mr. Hogarty indulged me - until we put our sleep future up on the wall and it didn't look right either [see 2nd and 4th colors from right in picture]. When it comes to orange, what is good for the back patio - orange! - is not good for the bedroom (as they say) and though the shades were called something like Sienna's Miller and Hut's Desire, they are actually more like orange-y brown and brown-y orange. We thought we learned our lesson there, but then we went back for Tanbark, which is (see brownest shade in picture) pretty damn dark/bark as well.

Why is warm in theory, dark on walls? Oh, paint/color theorist - read our blog, leave a comment and answer my inquiry. Ed and I wanted no VOC paint and found an affordable line at Sherwin Williams about 8 blocks away. We used their website a lot, especially the handy "Color Visualizer' -- a tool that allows you to paint and re-paint (and re-paint and re-paint and take a break, watch a movie and paint and re-paint) the walls of a generic room choosing from any of the 700 colors with names like Shipshape and Ship's Mate and Procreate and Head of State, to name a few. But not only could we not find a generic bedroom on Color Visualizer that looked like ours, the virtual paint never looked the same when we got it home and put it up. Choosing a color ALONE is a hard task; choosing a color together is like trying to buy one pair of jeans that you can both wear -- ridiculous. One person has to persuade and the other person just has to go with it. Or, get sick of it and walk away. And come back an hour later and say, "Are you still using the Color Visualizer?" No, no, I'm really not.

But, the tall tale spins positively because, if we had just stuck with the icy boat, we would have never come up with Moroccan Brown and Underseas. See? [Pic soon]. We get our warmth and a little chilliness mixed together. Imagine a submarine off of Tunisia. Or a frigate at the Cape of Good Hope. That will be our bedroom. Warm. and cold. And Warm. and cold. And WARM...

And for now we have our own Cy Twombly-like wall [see photo above]. Coincidental and odd because underneath the primer on this same wall, which was also once under 4 layers of wallpaper [see post titled "I fought the Wall and the Wall Won"], there is a heart drawn in pencil and inside the heart, some chicken scratch that says, (to the best of my knowledge): "When I grow up, I want to be a undecipherable." And each word has a pencil line drawn through it. Very Cy. 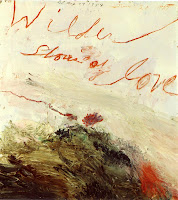 Or maybe our attempts at Cy Twombley imitation should have gone on the other wall where - under 4 layers of wall paper again - we discovered a picture of a woman with no head; just a skirt covering a pretty big butt and some shapely legs. That one is a lot more Picasso...or no, that other guy...DeKooning.

Post post: No color theorist wrote in, so we did not know that Underseas would be too green to mix in well with the red, warm mud walls of Morocco. More research revealed that Home Despot also has no VOC paint called "Freshaire", and since the Deep is open on Sundays we were forced to buy paint that features in depth interviews of political leaders and topical and cultural icons and TG fawning over anyone remotely related to The Wire. The color that we picked for the accent wall is called, "Omar Coming". Not really, it's called: 'Healing Waters'.

The guy at the Deep told me that since their business is mostly contractors, I was only the second customer to buy no VOC paint in the whole two months that they've had it. The price is almost twice as much as what we paid at Sherwin Williams, so....go to Sherwin Williams. Or Greenable in Old City, though I've heard that that one is pricey too. Redoing the master bedroom is a project that has now taken at least 6 months longer than we thought it would. We've stripped several layers of wallpaper off the walls, repaired the plaster underneath, installed supports for a ceiling fan, demolished the current closet and rebuilt the shell for a new one, and put a new ceiling up.

Through all of this, the part that has been the biggest pain in the ass is the sanding. Betsy has written before about the dust that permeates our lives, and sanding those walls did take forever. However, that task cannot compare to sanding the ceiling.

Now, I'm not an idiot - I'm taking precautions by wearing a mask and safety glasses. I'm also wearing a hat. But there are some complications. First of all, I can't wear my contact lenses while sanding. The fine dust that's in the air immediately starts irritating them, and they get dried out. So I need to wear my glasses. On top of my regular glasses, I wear the safety glasses. As I breath in and out, the air I exhale gets pushed out the top of my mask and fogs my regular glasses. To combat this, I push my glasses far out to the tip of my nose. This pretty much eliminates any peripheral vision. The safety glasses get covered with dust almost immediately, so every few minutes, I need to stop and, using my index finger, wipe the safety glasses clear. But they never really get clear.

My friend Andy suggested putting a sanding block on a long pole, and sanding from the comfort of the floor, but I just don't see how you could get any leverage that way. It would be nice to not have to climb down the ladder and move it a foot this way or a foot that way every 5 minutes.

Anyway, the ceiling is almost finished. After that, the room gets a serious cleaning and the fun part begins - painting!
Posted by Ed at 9:54 AM No comments: