When Betsy and I bought the house, pretty much the first thing we did was caulk the bathtub. The reason we made this such a priority was that water was dripping from the dining room ceiling about 20 minutes after either one of us took a shower. It didn't take much detective work to figure out that the near total absence of caulk around the tub was allowing a good deal of water to shoot straight down into the room below. Four years later, the caulk was starting to look a little worse for wear, and with all the effort about to be put into fixing up the dining room, we didn't want a repeat of the waterfall. So, in addition to the wallpaper scraping this past weekend, Betsy took it upon herself to clean out the old, mildewy caulk and expertly apply a new, fresh layer. 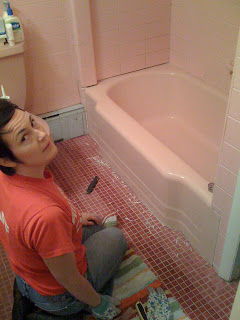 I guess this means I'll be re-staining the back fence pretty soon. 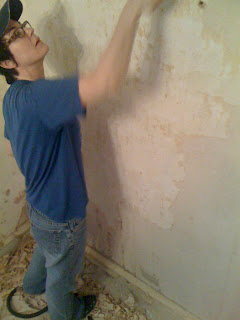 After prepping for wallpaper removal last night, we were ready to go this morning (late morning) with the steamers. These things suck up a lot of electricity. We had them plugged into the same circuit, and blew a fuse within 10 minutes. The extension cord was almost too hot to touch - yikes! After separating the steamers onto their own circuits, it was... uh, well I guess it was full steam ahead. One wall down, three to go. 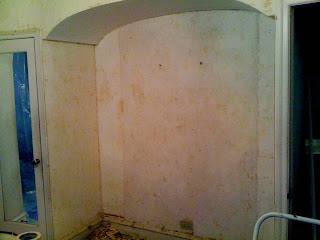 
Spent today gearing up for stripping wallpaper in the dining room. Should be fun.